When the scaffolding finally came down from a new apartment building on the Gold Coast, social media was flooded with photos taken by awestruck locals.

No one had ever seen anything like it; a building inspired by, and a celebration of, a nearby group of heritage-listed Norfolk pine trees, with a series of architectural curves mimicking their cone-like seed pods.

“We’ve been taken aback by people’s reaction to it, to be honest,” says Koichi Takada, architect of Norfolk, the 10-storey apartment block at Burleigh Heads. “It was very much designed for its particular location: a corner site facing the park, by the beach.

“We knew it looked different from most other buildings, and it does stand out, but we’ve been really pleased to hear how much people are liking it.”

The 10-storey structure has 15 apartments which, in the most telling compliment of all, sold out before the building was finished. Buyers for the homes, starting at $4 million, came from as far afield as Sydney and Melbourne, and from Queensland, as news of the ambitious design plans spread.

The 31.45-metre-high building, on a 1012-square-metre site, ended up faithfully replicating the original design scheme, with the overlapping curves and linear screening making it a standout structure at the southern end of Burleigh Heads Beach.

It’s not just for the look either. The curves are calculated to protect the residents inside from the elements, with slatted screens that can be opened to bring in the sunshine, light and air.

“The sculptural facade references the inner workings of the Norfolk pine, which is a natural icon in the Gold Coast region,” says Takada, an award-winning Japanese-born architect who lives in Sydney but works on projects around the world.

“Just like their pine cones protect its seeds from bad weather and open when in ideal natural settings, Norfolk’s architecture reacts to conditions for the people living there.”

The balcony slabs provide shade to outdoor spaces below, and sliding slatted screens can be changed for privacy or protection from the elements. Curved battens form the central spine of the building and provide openings to panoramic ocean views.

Developer Forme was initially cautious about the design, but its managing director, David Calvisi, says he is now so delighted by its success that he has asked Takada to design another apartment tower, this time 17 storeys high, again at Burleigh Heads. 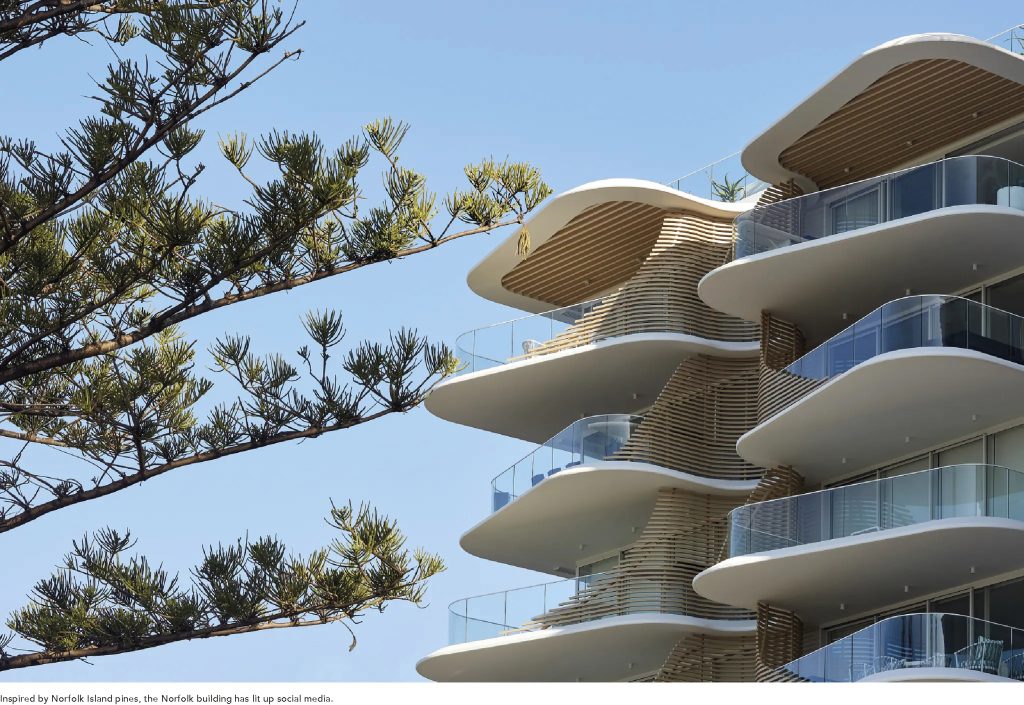 “Norfolk has been a great success, and it was important that we carried the key elements of its success, mainly via the architecture, through to the design of the new building,” Calvisi says.

“But I don’t think we’ll see a series of Norfolk pine buildings all around Australia any time soon,” he says in the week his new book, Koichi Takada: Architecture, Nature and Design, is published.

“This was a very special sculptural response to a particular setting, and I don’t think it would work in many other places.”